Nothing bad has happened, but my blood work a few months ago confirmed that I am definitely pre-diabetic. It got a little worse since my just barely pre-diabetic test value before I got pregnant with Amelie.

I'm pretty glum about it because I don't know how to fix it. I already eat pretty healthy. I actually cut out refined sugar back in July, but I lost some ground with that over the holidays. I'm still not eating candy or anything intensely sugary like that but still, it's not where I want it to be. Oh, and I'm already taking Metformin which is a diabetes drug that helps with PCOS. I wonder if I would be full on diabetic without it?

The past few days have been better. I managed to skip my daily dose of dark chocolate most mornings. I don't think a few squares of dark chocolate are all that bad but I wondered if they were a gateway drug of course.

Thanks to Shannon's advice, I've started testing my blood sugar in the mornings when I wake up. It's supposed to be below 100. I've had a few 104s this week and one 107. I think it's from eating dried fruit. I  think that when I skip that, I'm below 100. Of course, if over 100 is prediabetic and all it takes is a few prunes to push me to prediabetic, does that mean that skipping the prunes to stay below 100 mean that I'm no longer prediabetic?

I think I have to do a glucose challenge test -- eat a ton of sugar and see how my blood sugar reacts. Even if I only do it once, if my blood sugar freaks out, I think that's diagnostic.

Regardless, I don't know how to make this better. I eat pretty darn well. Many weeks, I do five workouts -- intense workouts, though admittedly only twenty-five minutes plus stretching and PT exercises -- a week. I don't smoke. I don't eat a lot of sweets. I don't eat many carbs during the day, in large part because if I eat them, I feel awful afterwards. I am learning that this isn't normal. That lots of folks can eat an apple and not fall asleep afterwards, or eat a bagel and not get an uncomfortable headache afterwards.

I'm scared. I'm scared of getting all the health complications that go along with diabetes, things like cancer and heart disease, and not being around for my girls.

Nothing I do seems to lead to sustainable weight loss. It's not obvious to me that my weight is the issue. (My BMI is in the just slightly overweight range.) It's the PCOS. But losing weight might help. I'm worried about the fact that although my weight on the scale is stable, I have a growing amount of belly fat.

I'm reading a book right now called Wheat Belly. About how wheat has a higher glycemic index that table sugar. And that it acts like an opiate on the brain.

I'm pretty sure I tried going gluten free before without noticeable benefit, but planning to try to go gluten free again, along with mostly sugar free. I did see some small benefits from that -- my hair and skin seemed better.

I'm desperate to find a way to get healthier for my girls. Being an adult sucks sometimes.
Posted by Abby at 7:24 PM 6 comments:

Calliope is very interested in the idea of getting married. Entirely because she wants to wear a fabulous outfit.

She informed the nanny tonight that she, Calliope, is getting married. To herself.

The idea that you STAY married is unfathomable to her. To her, getting married is like going to the movies. Something you do for a few hours. And not necessarily with another person... unless you know someone else who wants to wear a fabulous outfit, too!

However, she also mentioned finding us a Daddy. She told me, "it's a special case and I will need a magnifying glass."

Clearly she has been inspired by a book my parents made for me, back when I was five, about my being a detective. She is now ready to solve The Case Of The Missing Daddy.

She said it wouldn't be a problem for him to sleep in my bed... there would still be space for her because she could just sleep on his belly.

My joyous girl is cruising (well, crawling) towards a year. Hard to believe.

She endured allergy testing a few days ago and does not have a wheat allergy. I'm flummoxed. Of course I don't want her to have allergies but both the nanny and I have repeatedly noticed eczema flare ups (or an eczema-like rash) after wheat exposure. But the allergist said it's not an allergy unless it's hives or difficulty breathing or other symptoms like that. And keeping wheat allergy out of her diet now can actually make her more prone to allergies or Celiac Disease in the future.

So she'll be having a little challah with her dinner tonight. Fingers crossed that it goes well.

She's crawling everywhere now, and can switch from crawling to sitting and back again. And just a week or so again, she started pulling herself up to standing. My little baby isn't so little anymore!

She also chatters something fierce -- mostly a lot of Dadada, though I swear she says hi, or rather, "Haaaaa" as she waves. She pants excitedly as she crawls around the house. She's just so enthusiastic about everything that she can't contain her joy. 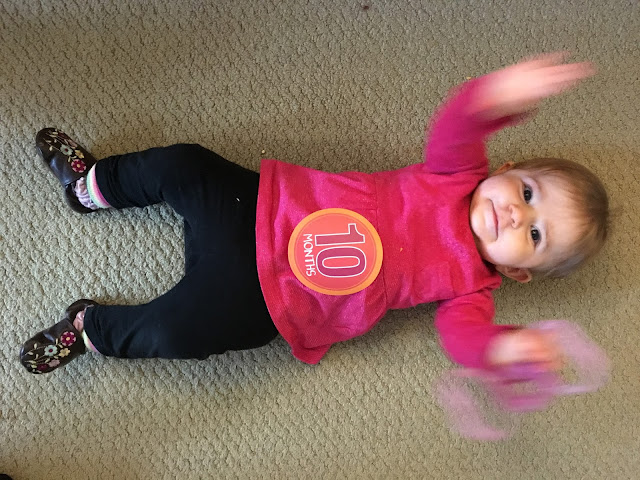 We have a growth check next week to make sure she's still getting taller. I think she's thinning out a bit. My robust eater is definitely less interested than she used to be. Especially with me. She's way too busy. She definitely drinks more milk from the bottle with the nanny (who feeds her alone in the glider, whereas we are always on the go when she's with me during the day) than she nurses during the day with me. She still loves her morning nursing session, and when she doesn't nurse enough at night, she wakes up around 9 pm for a topping up. Since I'm still awake, I don't mind that too much. And then she sleeps through the night. Hooray!

I was having an issue with her for quite a while with her waking up around 4 or 5 am. I would rush in to try to soothe her, or else move her to the pack n play in my room, in an effort to keep her from waking her sister (since they share a room). But then Amelie wouldn't go back to sleep. She'd happily chatter in her crib until I came in... and then cry once I left her again.

Finally I brought Calliope into my room for a few days. Amelie stopped waking up. And now I have found that even when Amelie does cry, especially before those 9 pm feedings... Calliope no longer wakes up. She's learned a enviable skill -- heavy sleeping. One I've always wished I had.

Calliope is doing great. She's rocking her new shorter "do." And she's suddenly very interested in writing words. She tells me what she wants to write and I spell it out for her. Today she wrote her first sentence!

I'm not doing any formal instruction with her at all, and am suddenly wondering if I should be introducing the idea that letters have sounds? I wouldn't push, but given her sudden interest in writing, I wonder if she would be interested. I suspect I will introduce the idea in a casual way, like "Hey, did you know that every letter makes a sound, and put together, they make words?" and ask if she wants to learn some letter sounds. I have no background in any of this and don't want to screw it up. Her school is very anti-academics at this age (and until first grade) so I'm very cautious about pushing.

ETA: I tried mentioning the idea to her and she wasn't into it. I'm backing off now!

But then this morning, she said, "Do you know what sound A makes? Aaaah."

New year's resolutions always intimidate me, so I like to start working on them in December. Just to take the pressure off a little.

Here's what I've got so far. But my friend Emily suggested a "resolution of the month club" based on a great article she sent me on the idea, so I may have more.


Does anyone else want to do a Resolution of the Month Club? Post a resolution each month and post status updates as desired.

We switched doctors once again, this time to the shiny new practice in my neighborhood that's connected to a whole network of shiny practices. I don't forsee switching again. Let's hope.

Anyway, I dragged both girls in together so the new guy could meet Calliope and discuss her asthma management. But mostly we focused on Amelie... who grew! She grew another 1.7 inches in two months (and grew an inch in the month before that), so she went from 1% at 6 months to a whopping 14% (26.7 inches)! Phew!

Strangely, she only gained 10 ounces in the past two months, despite a voracious appetite, so she's exactly 14% for weight too, tipping the scales at 16 lb 2 oz. She still looks deliciously chubby to me but I guess she's more proportional now.

The only slightly worrisome thing is that her gluteal folds were not symmetrical -- when the doctor squished her thighs together, the rolls of baby fat don't line up evenly, so I have to take her for an x-ray to make sure she doesn't have hip dysplasia, when the ball of the joint doesn't sit right in the socket. He said it wouldn't be a big deal now but would cause arthritis in her fifties. I'm trying not to worry yet about how I would keep a crawling baby in a hip harness for a few months. He said he hasn't picked up an actual case of dysplasia now despite sending a number of babies for x-rays, so hopefully we are one more case of his being abundantly cautious.