Lest Calliope's milestones get lost amongst the more noteworthy one's of Amelie's... at long last, Calliope learned to skip today!

Only she and her pal Peyton couldn't skip amongst her school friends, and her best friend Eleanor has been skipping for well over a year now. Calliope really struggled with feeling left behind. I watched a YouTube video on how to teach it, and had broken down the steps for her. We practiced a few times recently but it hadn't stuck yet.

And then today, I picked her up from her classroom and she skipped down the hall. Just like that. Without saying a word.

She's still not perfect at it, but the pride evident in her beaming smile says it all.


And here she is, proud of her latest creation. 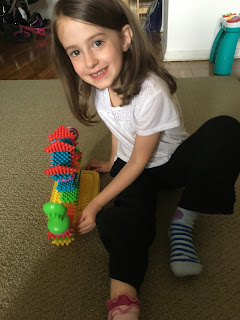 Her teacher casually commented to me yesterday, "this girl has so many friends now. It's amazing to see the change in her."

My heart burst with pride. Calliope was so quiet and reserved for so many months, and I certainly wasn't disappointed with her, but now... she's learned to connect with lots of different people, both adults and children. I'm so happy for her. This is so such a wonderful ability to have.

And she spent yesterday's entire puppet show performance in her teacher's lap, so nervous about the Wicked Witch of the West... well, it's good to be able to ask for help. I'm so grateful to her loving teacher for sensing Calliope's concern and offering her lap a day in advance of the show -- we had it all planned out ahead of time.

I'm also bursting with pride with my littler one, who is getting very, very good at standing unsupported but seems, at nearly 14 months, to be in no rush to walk. All in good time. I've no doubt she knows what she's doing. And that, also, my life is about to get much more challenging when she walks.

Inspired by Surly Mama, I'm paying it forward in the form of my incredible good luck in conceiving my two healthy girls with relative ease, though it didn't necessarily feel easy at the time!

Still, SMC hopeful Kristina has been trying for an incredible ten years, some with a partner and some without, and she's now trying to fundraise a mere $6000 to help her pursue a guaranteed pregnancy program with donor embryos through California Conceptions as an SMC once again. (She'll pay the other $6000 herself, but can't afford the full $12,000 after her many years of TTC.)

Six thousand dollars is a relatively small amount. It shouldn't take her long from our army of supportive SMCs. One SMC gave $5, all she could afford, and I know it meant the world to Kristina.

Thanks, Surly Mama, for suggesting this!

A Little Self Discovery in Self Care

I've been working with a holistic health counselor for a couple of months now. She's given me some interesting ideas to try, like swapping out cheese for hard boiled eggs (apparently dairy can be problematic, metabolically speaking, for women with PCOS) and having (decaf) chai tea with half a teaspoon of honey (and a couple tablespoons of heavy cream) when I get hungry at night. Apparently there's something about all the spices in chai that are particularly satisfying. News to me but amazingly, it works. And I'm not much of an herbal tea kind of person.

Last night we had one of our Skype sessions and I was explaining to her that I am having very few sugar cravings... but I'm still eating a little treat every night. Not because I crave the taste but because, I realized as I spoke, "I'm taking care of someone else every minute of the day and when the kids are finally in bed, I want someone else to take care of me."

Wow. News flash. I hadn't realized that this was my issue. That I wanted to hand over control.

I'm not quite sure how to achieve this feeling of surrender but it was an interesting insight. As was the observation that tears welled up in my eyes as I said it.

I don't know what to do with the fact that I have everything I've ever wanted, and I'm so grateful, and yet so damn tired. I don't want to waste a minute with my girls at these wonderful ages and yet I'm so spent I can't properly appreciate it.

Thirteen and a Half Months

Amelie is growing and thriving. Not walking yet, but getting close. I think. Lots of no-hands standing up. I've gotten her to try taking steps on a couple of occasions and she'll take one and stumble. She can walk holding just one of my hands, though. And all she wants to do is practice walking, preferably doing laps while holding someone's hands, otherwise pushing a walking toy around. She's gotten pretty good at steering her walking toys -- she can back up and swing around in circles.

She's still only got two teeth, both on the bottom, but there's four in a row on top waiting to come through any day now.

She eats like a champ and loves meat, in particular. Strange baby! Calliope was never like this so it's especially fun to have a baby with a hearty appetite.

We are in the process of weaning. Nursing her has always been a mixed blessing, often uncomfortable, and I've had to work hard to maintain a supply, taking nursing supplements (herbs) for months now. So I decided to stop those, and I stopped pumping at a year, and the milk is slowly going away. And then I decided, definitely, not to take her on Calliope and my long weekend to the Bay Area for my uncle's wedding. And this way I don't have to deal with pumping while we are gone. So we are down to once a day, and the last couple days she's had cow's milk after the morning nursing. She seems not to care which one she gets, or might have a small preference for the bottle since it's easier. I'm just hoping that I don't get hit with depression like I did the last time I weaned -- that was a pretty miserable three weeks, until it abruptly disappeared. I saved some placenta pills from the postpartum period so hopefully those will help if I need it. Now I just have to pick the day I stop entirely.

In addition to saying hi, she nows says bye, too. She was saying "poop" this morning, copying me, also thank you. I don't know if it "counts" as a real world if she's just copying me. She now says "bye!" and makes her version of a kissing noise before she wheels out of the room with her walking toy.

We've done some trips to the potty, with a few successes, and that's exciting. I'd love to try potty training this summer, at 15 months, but am not wildly optimistic that it'll work out. I just think summer is the ideal time for it and I hate to wait a whole year to try again. I definitely think earlier is better, and easier in some ways (though harder in others). She likes sitting on the potty with books, and always wants to check the potty to see what's inside.

The nanny and I are trying to transition her to one nap a day. It's rough. We can keep her up until about 10:30 am, but it's a stretch. Yesterday we went out for a walk, in hopes of keeping her up and also needing the kids to get some fresh air, and we stayed out just a little too long and she fell asleep. And only slept 90 minutes (still, a record for her in the stroller), and was up extra early this morning as a result -- 5:15 on a Sunday morning. Sniff. My kids generally wake up early when they are overtired. A maladaptive response if I've ever seen one. I feel bad that I'm switching her when she's not really ready but it's hard with two kids -- this summer, I need her to be awake in the mid afternoon so I can pick Calliope up from camp.