Hide and Seek, Sort Of

Susie taught it to her. It was one of those little things that had never occurred to me... thinking about when peekaboo might turn into full-body hiding. (She's still a huge fan of peekaboo games.)

Tonight she hid around the corner from me. And after a moment, called out, "Mommy, come! Hide!" And held out her hand to me.

"But Calliope, if I hide with you, who will find us?"

So we hid together.

A moment later, she understood the limitations of hiding together, and scampered off to her room. Obediently, I started to count to ten... as she counted out loud along with me, from her "hiding" spot in her room.

And then, too excited to wait, she came running out to find me. 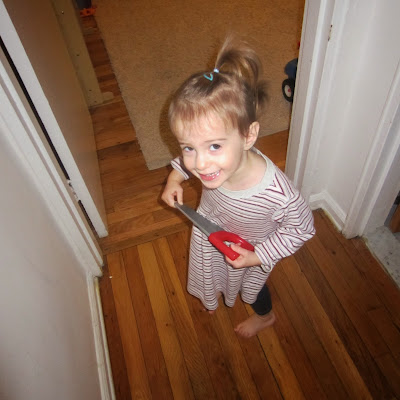 Calliope's become a bit of a nudist lately. In the crib. When she's supposed to be sleeping.

She kept her diaper dry (and usually, on) for her last three naps, so I asked Susie today to put Calliope down for a nap without a diaper. For the first time... except for those two instances where Crappy Mommy simply forgot to put a diaper on for nap time. Those two times, Calliope woke up wet and miserable.

This time, the nanny reminded her, and as per my request, changed her into baggy pajama bottoms with no underwear (or "pahn-tees" as Calliope now calls them, as Susie calls them (that's "panties" with in Spanish, for the uninitiated). Skipping underwear was key to her success for daytime training for the first month or so, so I was hopeful it would help this time around as well.

She woke up dry.

So that's four days in a row. Only one without a diaper. Well, plus the one where she removed the diaper at some point. I don't know if it was before or after sleeping.

A few nights ago, and again tonight, I went in to find Calliope in her crib at night without her pajama bottoms and diaper. And since she always wakes up with a wet diaper in the morning, I'm confounded.

I could just duct tape the diaper on. But she seems so determined. I want to honor that. But I am doubtful that she is physically capable of staying dry all night.

But I guess if she stays dry for a few more naps, maybe I will throw caution to the wind, or the washing machine, and try putting her to bed without a diaper. Am I supposed to then wake her up to put her on the potty before I go to bed? Or just let her try it out, without assistance from me? I hate to push her before she's ready... but if she has the desire, does that mean she's ready?
Posted by Abby at 6:42 PM 4 comments:

Lots and lots of limit testing over here. And I'm really struggling with it. Because it's little stupid stuff.

Like tonight, she was bouncing all over her crib. Literally, jumping up and down.

So I said, "If you want me to cover you with the blanket, you need to lie down by the time I count to three. One, two, three."

And she kept bouncing until I got to three... and then, one second later, lay down.

And I feel like, geez, it's only one second, what's the big deal?

But on the flip side, I think, well, I told her she had until the count of three... and she understood that perfectly well. She's testing me. And needs to see that I set clear limits. So she needs me to follow through on my threat?

So I said, "nope, too late. We can try again tomorrow night."

And she cried. "Banket! Banket peez!"

And I didn't go back.

And felt like an ogre. As she cried piteously. For possibly as long as a minute.

And then resumed her joyful playtime in the crib.
Posted by Abby at 5:32 PM 5 comments: